Bangladesh Human Rights Foundation-BHRF has been doing some magnificent activities to ensure the human rights for the poor, abused and neglected people. Though The foundation established on the basis of the constitution of Bangladesh and universal declaration UN general assembly, started its activities officially from 23 July, 2009, chairperson of this organization Advocate Alena khan has been working in the field of human rights a 26 years long and the members of the board of trustees on human rights issues for a long time.

Mr. Rajeeb Samdani is the Secretary General of Bangladesh Human Rights Foundation-(BHRF) and the managing Director of Golden Harvest Group.

BHRF is a nongovernmental and non-political human rights organization, whose affairs are being managed under the guidance and supervision of dedicated human rights organizer, founder of BHRF Advocate Alena Khan and by the financial and humanitarian assistance of the members of trustee board the foundation. Specially Golden Harvest Group donated the fund of Bangladesh Human Rights Foundation-(BHRF).

The organization has established a strong network throughout the country by setting up branches in almost all districts of the country. 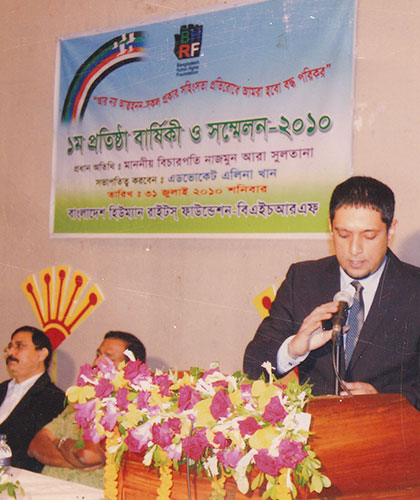